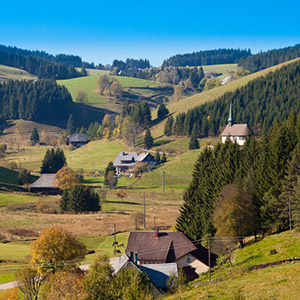 There are numerous typical Black Forest things, which are well known far beyond its borders. Beside „Bollenhut“ and Black Forest cake it‘s above all however cuckoo clocks, which are internationally well-known. Where is the home of the cuckoo clock? What makes a traditional clock a fabulous Black Forest cuckoo clock? And do you have to feed the bird regularly in the clock? This and many other questions will be discussed in the following.

As in the Black Forest the cuckoo came in the clock...

Why does a cuckoo live in the clocks? It could just as well be a nightingale or a siskin!?! With modern technology this would be no problem. A simple clockwork, plus some electronics and the clock would be finished. The Cuckoo Clock is a traditional product that comes from a very different time.

Who really had the idea to develop a cuckoo clock, can not be clarified today. Too many stories, myths and anecdotes revolve around this emblematic clock from the Black Forest. What is certain, however, is that first cuckoo clocks are already known from the early 17th century. However, the typical Black Forest cuckoo clocks where sold from the beginning and the middle of the 18th century. We are, therefore, in the time when the steam engine was about to trigger an industrial revolution, but electronics and electrical engineering were far from known. Thats the reason, why they use only purely mechanical solutions for the construction of a cuckoo clock.

The reputation of a cuckoo can be imitated comparatively simply with only two tones. For the crowing of a rooster, on the other hand, it would be at least four notes, and for the melodious song of other birds innumerable different sounds would have been necessary. Since, however, several tones had always meant a large number of components, the clocks would have become more complex, larger, and much more expensive. In addition, the cuckoo has always been a native bird of the Black Forest. For this reason it can be assumed that, on the one hand, the inspiration from the domestic animal world, as well as the comparatively simple construction, led to the selection of a cuckoo for the clocks. 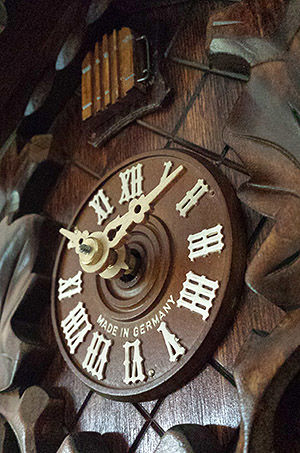 So, what makes a typical cuckoo clock?

Classic cuckoo clocks are usually mechanical wall clocks with a pendulum movement. In recent years, more models with quartz clockwork have also been introduced to the market, but later on. Classic cuckoo clocks have a mechanical pendulum with chain hoist. The secret of the cuckoo clock is a striking mechanism, which imitates the reputation of a cuckoo as an acoustic signal. In addition, all Black Forest clocks are equipped with a mechanical cuckoo, which sits behind a flap in the case and always shows itself at the full hour analogous to the cuckoo calls. This should  by the way be clarified, the bird does not have to be fed. In addition, the hours are counted by the cuckoo calls, the bird calls between one and twelve times, depending on the time. In addition, a gong or a bell play is usually heard.

Classic cuckoo clocks are usually decorated with wood carvings. In addition to the usual face of the clock and the flap for the cuckoo, these decorations can vary widely from model to model. Typical motifs are foliage, branches and cones as well as animals such as birds, hares or deer. Also the pendulums are often decorated with a suitable carving, the weights on the chain hoist usually come in the shape of pine cones.

In addition to classic and rather abstract models of mostly solid color dark brown carved wood, there are also clocks that represent a complete scenery. Normally, the case of the cucoo clocks comes as a Black Forest House. Around the house, in great detail, there are individual scenes from the life in the Black Forest presented. There are also clocks which have, in addition to the mechanical cuckoo, further movable elements. For example, a group of dancers will revolve at each hour.

But how does a mechanical cuckoo clock actually exactly work?

Basically, the mechanics of cuckoo clocks are based on the principle of a conventional clock mechanism. "Thanks for this detailed information!", you will think. But dont worry, we'll get it simple and understandable.

A beater is an ingenious mechanism of a wheel clock. This is because the wheel rotates in it, which always trigger a special action at the desired time. For example, calling the cuckoo at the hour. Of course, with clocks of this type half or quarter of an hour can be beaten, but for the sake of simplicity, we limit ourselves to full hours. 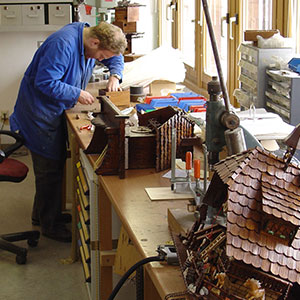 Cuckoo clocks with mechanical clockwork must be wound up. This means that a weight on the chain hoist is pulled upwards by hand and then moves permanently downwards, so that the movement is driven. At the same time, the triggering mechanism of the impact mechanism is blocked. Only when the minute hand reaches the 12 o'clock position, a series of mechanisms are triggered that cancel the jamming of the beater for a short moment and make the clock beat according to the number of hours. For this purpose, a step wheel with twelve steps is coupled to the hour hand. If the blocking is released in the 12 o'clock position, a trigger, the “rake”, falls on the stepped wheel. The later the clock shows, the further falls the rake. After this, however, a complex mechanism is set in motion. This causes two small bellows, weighted with weights, to be lifted and released. These, in turn, blow their air into a kind of small organ whistle, imitating the call of the cuckoo. Depending on the number of hours or the height of the rake, the mechanism ensures that the bellows are actuated between one and twelve times.

In addition, a pivoting device is coupled to this mechanism which, upon actuation, opens the flap for the cuckoo and moves the bird towards the flap. Other elements that perform an action at the hour can also be linked to this mechanism. In particularly complex clocks, several impact mechanisms are installed.

Today, there are also cuckoo clocks, which are equipped with a quartz movement and are operated by means of a commercial battery. The advantage here is that the clocks can be built considerably smaller. Thus clock movements of this kind are often used in modern and especially small cuckoo clocks. In addition, clocks with quartz movement do not need to be re-wound and thus run permanently, without having to worry about it regularly.

To make it short…