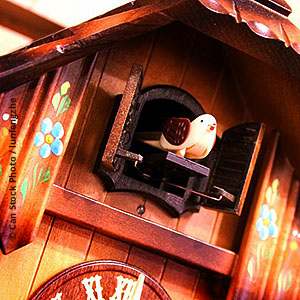 The sound of a cuckoo can be imitated with just two tones. In addition, the cuckoo has been a native bird in the Black Forest for a long time. It can be assumed that on the one hand the inspiration from the domestic animal world, as well as the comparatively simple construction, led to the fact that one chose a cuckoo when building the first Schwarzwald clock. In this way, the cuckoo clock is an authentic representative of the Black Forest and its world-famous craftsmanship. Why cuckoo clocks are

Mechanical cuckoo clocks provide only one requirement to the owner: they must be reared. For this purpose, the weights on the chain hoist of the Black Forest cuckoo clock are each pulled upwards by hand and then moved downwards again by the gravitational force. The movement is driven by the resulting force. The trigger mechanism of the beat is blocked until the minute hand reaches the 12 o'clock position. Then a series of mechanisms are triggered and the clock begins to beat and the cuckoo calls.

This site uses cookies. By continuing to browse the site, you agree to our use of cookies. More Information
Close