Close filters
No results were found for the filter!

Are you looking for a special, unusual and funky gift? How about a modern cuckoo clock in a bright color? Cuckoo clocks from the Black Forest are now available not only in traditional and classic design. Many modern, fancy designs and bright colors are waiting to be presented as a special gift. 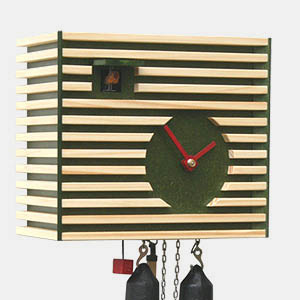 Modern cuckoo clocks are a combination of traditional craftsmanship and contemporary design. Some artists from the Black Forest followed the idea of ​​making a modern jewel from a conventional cuckoo clock. This has resulted in a whole series of unusual clocks, which has led to recognition and success all over the world. The design is determined by a clear-cut housing. Many different variants are available. Stylized bird houses, pyramidal clocks and quads in a variety of variations are available for every taste. Cuckoo clocks in bright colors such as violet, green or pink are no longer a rarity.

The motto of modern cuckoo clocks is: elegance lies in simplicity. But also in these clocks lies the whole experience of the traditional cuckoo clock industry of the Black Forest. Great paints set new standards in cuckoo clock design. Also in the material the designers go new ways. There are now also cuckoo clocks made of bamboo. A cuckoo clock in modern style is an ideal gift for people who have a taste for something special. Suitable for every modern furnished apartment with contemporary interior. All modern cuckoo clocks have the usual high quality from the black forest - with the predicate "Made in Germany"